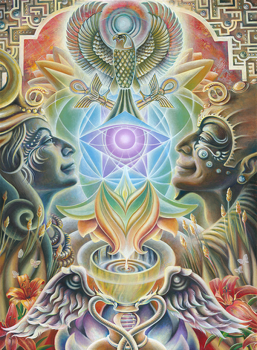 With her imagery, Ishka reveals a world of the eternal Beauty that is all things. A river of elementals, cosmic beings, and magical beasts swirl together in one great flood of light and shadow, emanating the shapes and colors illuminated within the Beloved’s kaleidoscope. With every turning of the wheel, an ever-changing cycle of Life appears. Dawn spills into the night sky, a blossom falls as a cherry grows; and the movement in our mind trickles down into a land where thoughts kneel before a pool of peaceful waters, watching silently, as Spirit emerges from the depths. 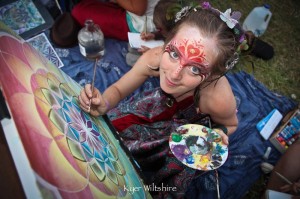 Ishka was born in 1982, and grew up in northern California. She loved to draw ever since she was a little girl, even if it meant getting carsick on long road trips with her family because she was so focused on her sketchpad. Her talent advanced as she got older, but she felt it was necessary to pursue a career that assured more financial stability. Society had taught her too much about the starving artist. And so, she sought study for a profession that was highly useful in society that would also require her artistic skill.

During her fourth year in college, Ishka spent a year studying abroad in France, and traveled all over Western Europe. Her experience of life outside the U.S. transformed her entire perception of art, architecture, and community; and it was then that she became much more certain of her path, both as an artist and an architectural designer.

Everything came to a climax in this little town she visited on the southern coast of Portugal—one of the last trips she made before returning to the states. In the hostel she stayed in, twenty complete strangers from all over the world had somehow come together as one big family. For the first time, Ishka experienced the miracle of coming together with people she had never met as though they had somehow known each other for lifetimes. Miracles began happening everyday; or, maybe it was that Ishka was finally allowing them to happen, and be a witness to them.

A rose, long-awaited, bloomed in her heart, and Ishka began to recognize God in all beings. She awakened to a Great Love for herself and everyone around her. This shift in her awareness marked the inception of a life long spiritual journey!

When she returned to California, she dedicated her next year of college studying as much as she could about natural building techniques and eco-village design, and developed her thesis around it. The architecture program had included aspects of green building over the years, but Ishka’s hunger for it and her interest in intentional community living intensified exponentially after her trip overseas. Moreover, her passion for art was renewed with a vehemence and sense of freedom all too wild and magnificent to describe any other way than to draw it. She no longer felt inhibited by the stigmas society had put on her greatest gift.

After graduation, Ishka made a solid commitment to her practice as an artist, and architecture would be her mistress. Ishka has since embarked on many other travels in North America and abroad, exploring and expanding her participation as a true citizen of the world. She uses every opportunity available to absorb spiritual guidance and inspiration for her art, and foster her development and dedication to community building and lifestyle.