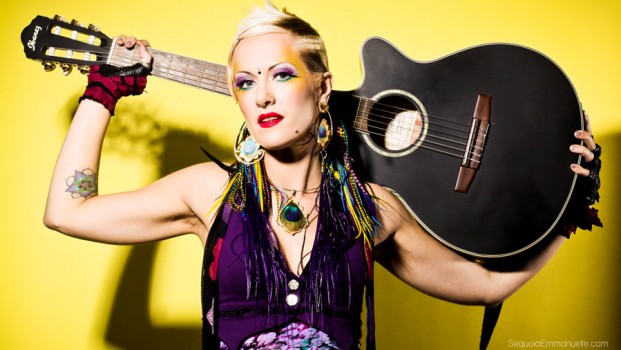 Amae Love is an eclectic singer / songwriter with a sultry, soulful voice that embodies a modern approach to soul, blues, R&B and jazz. Similar to artists like Amy Winehouse & Adele, Amae takes the best of that classic vintage sound and combines it with soulful, bluesy melodies paired with positive & empowering lyrics. She likes to call this style “Singin’ the Purples” as in: a higher consciousness version of the blues. Amae is a multi-faceted talent whose skills as performer include Improvisation, MC’ing, hoop dance, DJ’ing, Dance, and guitar.

Amae’s most recent & exciting musical offering is “The Amae-zing Birthday song!” This is an extremely catchy & fun little gospel / soul ditty meant to slowly replace our old, tired birthday dirge. Amae is a HUGE fan of birthdays and could not be more excited about her role of The “Birthday Instigator”. After raising funds on Kickstarter to produce a full-scale music video featuring a wild and wacky cast of characters, the result is finally ready for the world.

Amae has recently performed all over the West Coast festival circuit, Vegas, and the Oregon Shakespeare Festival’s Green Show. Some shining moments include opening up for Zap Mama at Earthdance Festival, a full stage show at BOOM festival in Portugal, and opening up for Theivery Corporation at West Coast Festival Lightining in a Bottle. For the last 4 years she has also been the lead singer / narrator for Performance art / Theater troupes Liquid Fire Mantra And Seraphim, whose stage performances feature some of the world’s best fire dancers, large-scale projections, professional dance and storytelling.

Amae’s recent Solo and group performances have included The Bagatelle in Vegas, Envision Festival, Harmony Festival, Lightning in a Bottle, the Raw Spirit Festival, Emrg-n-see, Alchemeyez, Mystic Garden Party, Burning Man, Beloved, Horning’s Hideout, & Bali Spirit Festival. She has sung with a host of west-coast underground acts such as the Human Experience, Everyone Orchestra, David Starfire, Gaudi, Blane Lyon, Nicoluminous, Cornflower, the Human Revolution, the Luminaries, Sasha Rose, Lynx, Desert Dwellers, Phadroid, Lucent Dossier and many others. She has collaborated on tracks with The Human Experience, The Human Revolution, Nicoluminous, and others with many more to come.