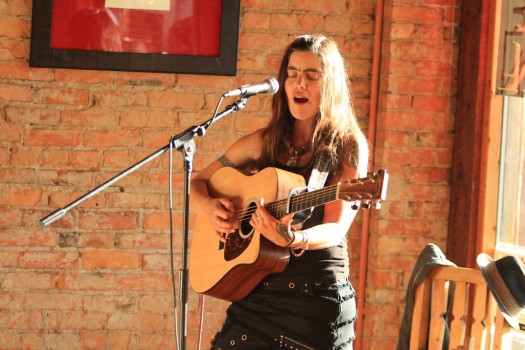 Diane Patterson writes, sings, and carries her Funky Earth Ballads and Sacred Songs for the Peaceful Revolution with acoustic guitar and ukulele, hand drum, and voice. She now performs with her smokin’ yet subtle band Spirit Radio taking her songs to a whole other level of expression. Patterson weaves spirit and unifying social commentary on festival stages, at folk music and conscious music gatherings, healing gatherings, and in concert venues around the world.

Diane plays and collaborates with a number of artists working towards a more sustainable future, through the celebration of Abundance by design. She released her most recent CD, Build a Bridge in May 2013 and is touring widely with that CD and her albums World Awake (2010) and Hip the Hip (2005).

Independent and supported by her community, Diane considers herself a micro magical munition of manifesting highest consciousness, cleanest food for body and mind, best balance and highest integrity of relations between all Peoples, Elements, Directions, and Resources. For this the songs are caught, carried, sung, rocked, and recorded. She has no home or car, but gets rides, stays with friends, and puts all her resources into her basic needs and recording and printing her music.